Back to previous page | Home Ambitious about Autism

“My sons have a brighter future now”

Alison Reade, 56 from London, explains how Ambitious about Autism helps her autistic sons

Single mum Alison Reade has two autistic sons – Cian, 25, and Conor, 20, but their symptoms are very different. “Whereas Cian never stops talking, Conor has almost no words at all.” 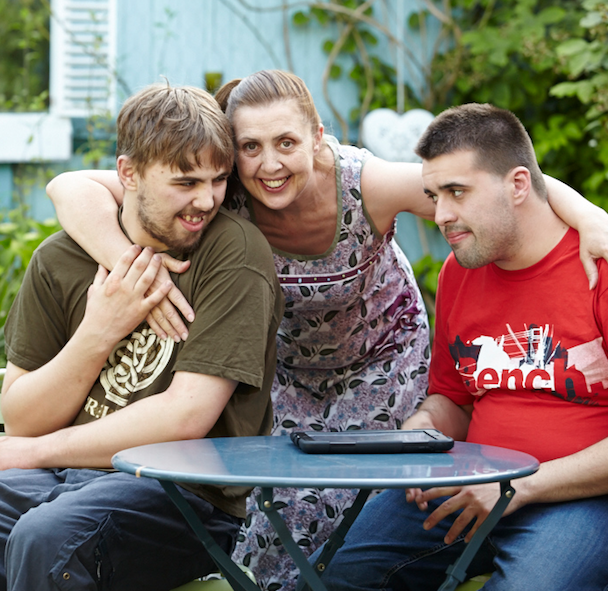 Alison realised her elder son Cian had behavioural issues when he was three. “His nursery teachers told me he was very disruptive and wouldn’t look anyone straight in the eye. “ When he was five he was diagnosed with autism. “It was a relief to have a diagnosis, but I was really worried for Cian’s future.”

The psychologist suggested moving Cian to a local autism-specific school. “We had misgivings at first, but we knew it was for the best and he settled well.”

By this time, Alison was pregnant with her second son, and began to worry about him. “I remember speaking to one of the mums at school who had two boys with autism, which concerned me.

“However, when Conor was a baby, he seemed to develop as expected. He reached his milestones and started to talk. He’d stand at the door and say ‘outside’ and blow kisses at people to say goodbye.”

However, by the time he was 18 months old, Alison noticed Conor was starting to lose his words and become withdrawn, and by the age of two he was completely non-verbal. “Luckily, as the brother of a child with autism, he was attending a nursery that catered to children with special needs, but I was devastated to be told he had autism as well.”

Conor was unable to attend the same primary school as Cian, due to his complex needs, but was enrolled in a local school for children with severe learning disabilities, where he thrived.

However, when Conor turned 11, he moved up to secondary school and struggled to adjust. “He started to regress. He wasn’t communicating and his behaviour became unpredictable.

“He would bang his head against the floor and lash out at others, hitting and kicking people and biting me on the face. For a while, I was scared and considered sending him to a residential school as it was so upsetting for us all.”

In 2008, Conor’s dad began learning about Applied Behaviour Analysis (ABA) – a technique that has been shown to bring about change in the behaviour of autistic children – and came across Ambitious about Autism’s TreeHouse School, which uses ABA to educate its pupils. “We immediately applied and Conor was offered a place.

“Having the tools to communicate and being around such supportive and knowledgeable staff helped reduce his anger, and I can now give him a cuddle without fear that he’s going to lash out.”

Last September, Conor moved on to the charity’s Ambitious College, which caters for students aged 16-25. “He does lots of activities, including swimming and photography, and they got him some work experience at a local shop too.”

Cian has also been involved with the work of Ambitious about Autism, serving as a youth patron for the charity. “They’ve had him talking about autism in Parliament, and he helped with the National Theatre’s research for The Curious Incident of the Dog in the Night-Time in 2012.

Cian is keen to get more involved with theatre, and is about to embark on a tour to perform his one-man play about his experiences of autism.

“I still worry about Conor’s future – unlike Cian,he is unlikely to ever live independently – but his progress has been great,” says Alison. “Ambitious about Autism helps improve prospects of those with autism on all levels, which is amazing for families like ours.”

Ambitious about Autism – THE FACTS

The £7,517 Ambitious about Autism raised will improve the lives of those with autism by campaigning for change and funding a special-needs school that educates more than 80 young people, an Information Service, online community and Ambitious College.