Sarah Humphreys, 46 from Derbyshire, reveals how Cerebral Palsy Sport is making such a difference

Earlier this year, Sarah’s 17-year-old son Matthew stood up at his school’s award ceremony and delivered a speech. “I watched him stand in front of hundreds of people, using his communication aid to help him talk about his achievements and I was filled with pride,” recalls Sarah. “As someone who struggles with his speech, this took a lot of courage and it was incredible to see how much his confidence has grown.” 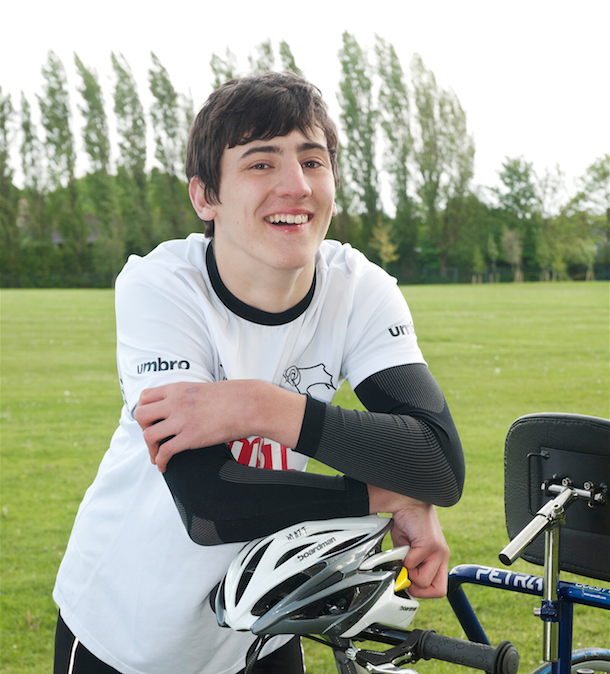 Until the age of ten, Matthew was very healthy and physically active, and would try just about any sport. “He loved football, swimming, snowboarding and cycling and was in lots of sports teams,” Sarah recalls.

Then in 2008, Matthew suffered a brain injury following a serious accident at home. “Matthew was put on life support and we didn’t think he was going to survive. It was an extremely difficult time.”

Fortunately, after three days, Matthew came round and was taken off the life support, although it soon became clear there would be lasting physical effects of his injury. The doctors ordered a series of tests, which confirmed he had acquired quadriplegic dystonia, a condition similar to cerebral palsy that causes muscle spasms and also affects mobility and Matthew’s speech.

“Matthew was in hospital for six weeks in total, then, for the following six months, we were back at the hospital every day for speech therapy, physiotherapy and occupational therapy,” Sarah explains. “We have continued to attend regular appointments to help with his mobility and speech, which can be difficult to understand.”

Matthew also had a deep brain stimulator implanted, to help reduce his muscle tightness, and was given a powered wheelchair.

“We are having our home adapted so Matthew will have more independence, but he needs help from us with things like tying his shoelaces, doing up his buttons and cutting food, which is not always something a 17-year-old boy wants! It can be hard for him, as mentally he’s exactly the same – it’s just his body that lets him down.”

In the years following his accident, although Matthew coped well and tried to stay positive, he would get very frustrated at times that he was unable to take part in the activities he enjoyed.

“Matthew loved sport before his accident, but presumed he could no longer compete. Then, during the 2012 Paralympic Games, he started seeing other disabled athletes competing, which made him realise he could still enjoy sport – just in different ways. That’s when we found Cerebral Palsy Sport, who were incredibly helpful and supportive.”

Since getting involved with Cerebral Palsy Sport, Matthew has competed in 100-400m races using the Race Runner – which is a custom-built tricyle bike without pedals – and took park in the 2014 BBC Children in Need Rickshaw Challenge.

“He will be competing as a RaceRunning athlete, which is something he is really excited about.

“Without Cerebral Palsy Sport Matthew wouldn’t have the confidence he’s now got, or
the belief in his own ability. Before, he didn’t know quite what he would end up doing or whether he would ever achieve anything, but now he thinks of himself as a sportsperson and is determined to achieve everything he can.”

The £18,247 raised by Cerebral Palsy Sport in The Candis Big Give will go towards a bursary fund to support young athletes with cerebral palsy taking part in the CPISRA World Games in August 2015, covering costs of training, travel and accommodation.