“No family should have to suffer as we did”

Lisl Haldenwang, 42 from West Sussex, explains why the work of Christopher’s Smile is so important

My eldest son, Otto, was always such a happy and healthy little boy. But in November 2006, shortly after he turned four, Otto began complaining of headaches and tiredness so I took him to the GP, but it was just shrugged off as flu symptoms. After about a month he also started to become agitated and was vomiting. Over Christmas he developed a squint in his eye and stopped eating. We went back to the GP, who referred Otto for an appointment with a paediatrician, although he would have to wait for two months. 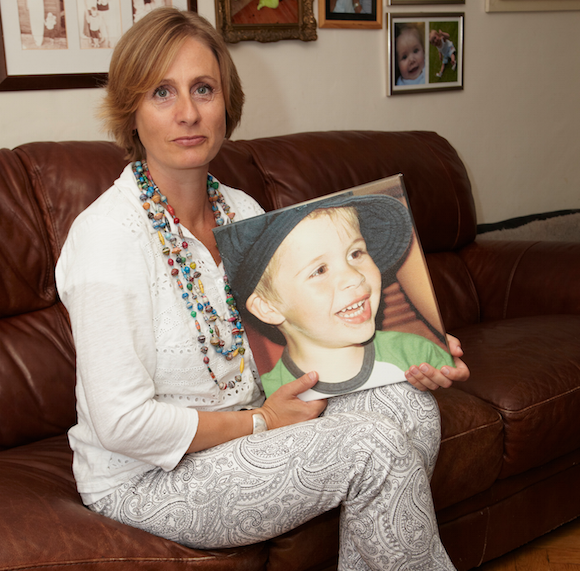 By 4 January, Otto had become so poorly that I took him to A&E, where he was immediately taken in for examination. That night, Otto was admitted on to the children’s ward and was taken for a scan, which revealed he had an obstruction in his brain.

The next day we were sent to St George’s Hospital in London where he was immediately taken in for surgery to relieve the pressure of the fluid building up on his brain. Once he had stabilised a few days later, they put a shunt in his brain – which managed the flow of the fluid – and also did a biopsy, which confirmed the diagnosis of a medulloblastoma brain tumour. We were absolutely heartbroken. Unfortunately, the cancer wasn’t a localised tumour, but was like a layer of snow covering his brain and spreading down the length of his spine, making surgery impossible. Our best option would be six cycles of high dosage chemotherapy, followed by six weeks of radiotherapy.

However, during the chemotherapy, Otto became very poorly. He experienced hearing loss, was vomiting up blood, and had ulcers in his mouth and throat so he couldn’t eat. He also picked up a virus which, because his immune system was shattered, he couldn’t fight off.

In May 2007, after five cycles of chemotherapy, they decided to stop the treatment because Otto was suffering too much, and his last MRI thankfully showed the cancer was almost gone. He was sent home to recover before the radiotherapy, and began to get much better.

However two months later, Otto’s symptoms returned and an MRI revealed the cancer was back. On 3 August, he woke us up, unable to breathe. We called an ambulance, and the paramedics had to intubate him as one of his lungs had collapsed. He was then taken to the paediatric intensive care unit at St George’s Hospital, where he was on constant intravenous morphine and anticonvulsants.

It became clear during this time Otto was not going to get any better. With no real treatment options left, we wanted him to spend his remaining time in a calm place away from all medical procedures, so we decided to take him to a hospice. The grief of losing our son was unbearable. But with two other children to care for, we had to find a way to keep going.

In 2008, we discovered our friend Karen – whose son Christopher sadly died of brain cancer around the same time as Otto – had set up the charity Christopher’s Smile, which funds research into new drugs to treat childhood cancers without the devastating side effects. I started taking part in running events to raise money for them.

Raising funds for the charity is the only thing left that I can do for Otto, who is in my thoughts every day. I want to help the charity so other families don’t have to go through what we did.

The £13,407 raised by Christopher’s Smile in The Candis Big Give will extend the tenure of a key researcher in early paediatric clinical trials, helping to speed up the development of new drugs for children’s cancers.