Back to previous page | Home My Story – Denise Fitzgerald

What they do: Fund research into conditions affecting babies, children and mums-to-be.

Who gets help? Sparks have funded more than 270 groundbreaking research projects across the UK and overseas, which aim to help the one in 30 babies born every day in the UK with a condition that may affect them for life. 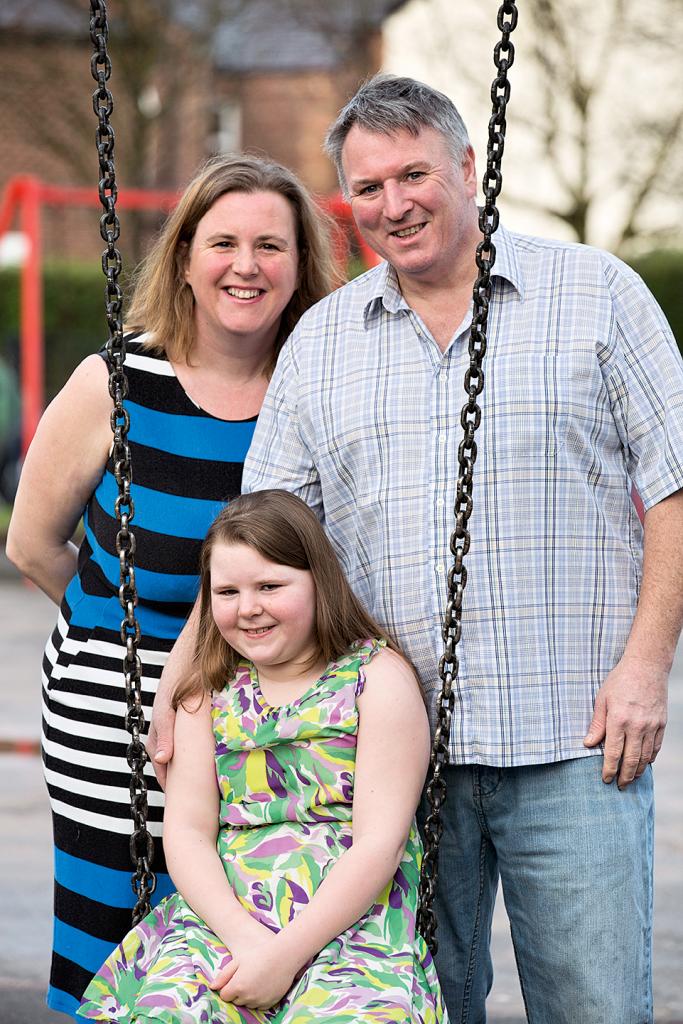 Holly was born three weeks early, in May 2005, and taken to the special care unit because she was having problems breathing. Her brain scan was clear and after being very sick, the following day she began to improve. We were told she may have swallowed something in the womb, and after six days she was discharged.

Initially everything was fine, but at six months we realised Holly wasn’t developing like her sister had. We were trying to teach her how to sit up and roll over, but it wasn’t coming along and she wasn’t starting to babble at all.

She was recommended physiotherapy by the consultant to help with her development. By then we’d also noticed she sometimes held her right arm oddly – at times it looked like she’d dislocated her shoulder – and I had a nagging feeling something just wasn’t right.

Within minutes of seeing the physiotherapist, we were told Holly had heightened muscle tone, meaning her muscles don’t relax even when she’s resting. I’d never heard of it and we were told physiotherapy would help, but there was no cure.

At 16 months old, Holly had another check-up with her consultant, who was concerned her speech wasn’t coming along. She had a brain scan in November 2006, which

confirmed our fears that Holly had cerebral palsy; an incurable condition usually caused by brain damage before, during or after birth.

We were told the left side of Holly’s brain was damaged, causing a weakness in the right side of her body. It would make walking, talking, and moving her right side a struggle and she would need the support of various therapists to develop and become independent.

Even when you suspect what’s coming, the words plunge into you like a knife and I cried for two days straight. Then my husband said, “She’s still our little girl,” and I realised I needed to cope for Holly.

Since then Holly has defied expectations. She’s learnt to talk and, although she still stammers a bit, her vocabulary and understanding are great. She also learnt to walk using splints and now attends a mainstream school. But the function in her right side isn’t what it should be, so she struggles doing tasks with her right hand and has some terrible falls, which breaks my heart because it’s a stark reminder of how vulnerable she is.

Last year, we agreed to take part in a research project funded by the children’s medical research charity Sparks.

It involved Holly doing activities such as colouring in, or counting on her fingers in front of a mirror that only allowed her to see her left side, which isn’t affected. By looking at the mirror image, it was supposed to trick the brain into making her right side do the same.

Holly did the tasks daily for eight weeks and I recorded the results. Gradually, her right side began to twitch and, before we knew it, began trying to copy her left side. The research is ongoing, so the results haven’t been published yet, but from Holly’s experience there were signs it worked, which was brilliant for us to see.

Research like this is so important, because without it things wouldn’t improve for children like Holly. It’s difficult for us to think about what will happen in Holly’s lifetime – the brain damage is there and I can’t see what would change that now – but it’s important for us to do what we can now to help children like her in the future.

The £276,836 Sparks raised in The Candis Big Give will enable them to fund new, innovative research into children’s health through The Sparks Innovation Fund. By funding important pilot studies and research, they aim to prevent unnecessary deaths and improve the quality of life for children.

How can I help? Click here to donate or find out more: sparks.org.uk