“They helped me become the best parent I can be”

Watching her five-year-old son, Nico, crawl across the floor or say a new word is something that fills Sinem, 38, with joy. “These little things that parents typically take for granted just swell me up with pride.” 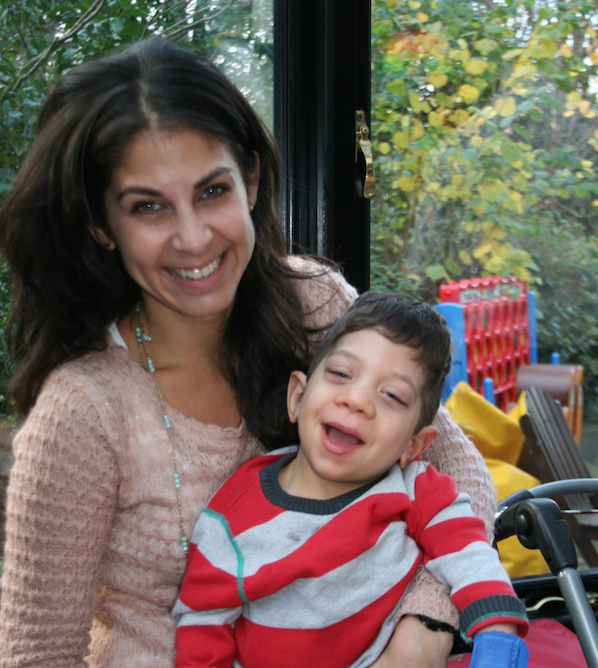 Nico and his twin brother, Duo, were born 12 weeks early, after an undiagnosed infection caused Sinem to go into premature labour. The twins were born at 28 weeks in quite a critical state.

Once Nico and his brother, Duo, were stabilised, they were transferred to Queen Charlotte’s Hospital. The next day, Nico developed a bleed on his brain.

“We were told Nico would need a brain operation and had to be transferred to Bristol, but as we were preparing to leave Duo’s lungs collapsed. It was so awful as I had to decide which son I was going to be with and they were both so unwell. I left to go to Bristol with Nico, and my husband stayed with Duo.”

While Nico was in Bristol, he had a brain operation where two cannulas were inserted to flush away the blood that had accumulated. He then had a reservoir implanted to withdraw the cerebral fluid.

During this time, Duo’s organs started shutting down. “This happened over the space of two weeks and when he was four weeks old, we decided to take him off life support, which was absolutely heart breaking. We were still trying to get Nico through every day so didn’t really have time to grieve.”

Shortly after, Nico had a VP shunt inserted in his brain to manage the flow of the cerebral fluid. Then, at four months old, he was allowed home. “Nico had started to breathe on his own but was still fragile. We worried every day he might die.”

Sinem also knew a brain injury at birth was likely to cause cerebral palsy. “We monitored his development closely and noticed his physical and cognitive development was delayed, and he had some visual impairment. For the first year he was very unresponsive and he also had to have a nasogastric tube to be fed for a while.”

Nico was diagnosed early on with quadriplegic cerebral palsy, which affects muscle control in all four limbs. When Nico was nine months old, the family were told about the day care at Haven House Children’s Hospice in Essex.

“In the early days, care for Nico was 24 hours a day and I couldn’t leave him with anybody, even for a short time,” explains Sinem. “I decided to try Haven House and really liked the feel of the place and the fact the staff were qualified nurses.”

Sinem started leaving Nico at Haven House from 10am until 4pm once or twice a week. “I was so grateful to have time to grieve and get counselling.”

Now Nico has started school, he has continued to use Haven House’s respite services during the school holidays, which is something he really enjoys.

“He has a great time playing in the sensory garden, doing crafts and being taken for walks. He’s got a personality people adore, and it gives me great pride to see that and know he’s surrounded by love.”

Although Sinem still worries about what the future holds for Nico – who is likely to be dependent on adults all his life – she is delighted with the progress he has made. “He has started going to a conductive education school, which focuses on physical independence, and has speech and language therapy and physiotherapy, and his symptoms have changed dramatically.

“Without Haven House I wouldn’t have had the energy to give Nico the support he needs. They have given me time to heal and become the best parent I can be.”

The £42,976 raised by Haven House Children’s Hospice in The Candis Big Give will help to employ care staff to provide expert care and quality of life services to young people with life-limiting conditions in North and East London, West Essex and East Hertfordshire.