“They’ve helped me make the most of life”

When lorry driver Martin Lawrie began experiencing pins and needles from his right elbow down to his fingertips 12 years ago, he was at a loss to think what could be causing the problem. 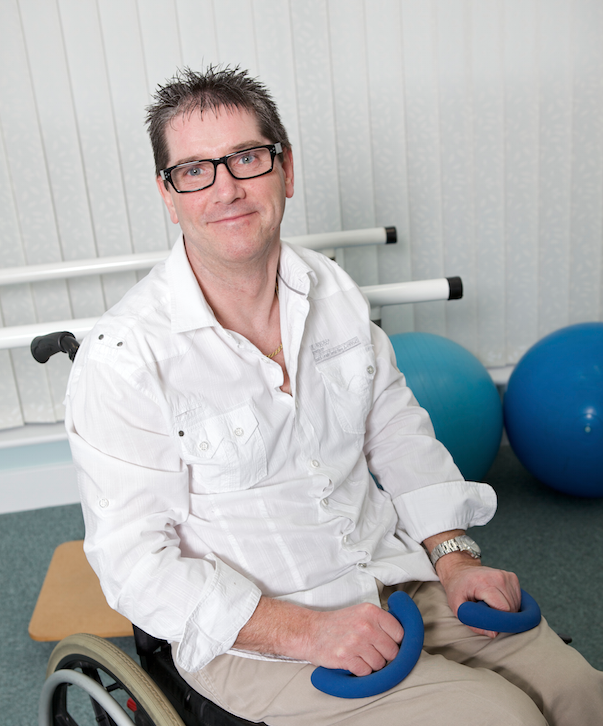 “My job involved long periods of relative inactivity, but I counteracted it by running every night,” he says. “I was very fit and never took a day off work, so I was quick to dismiss the tingling feeling as something that would eventually go away by itself.”

But despite ignoring it for several months, Martin, then 39, soon began experiencing other symptoms. “My legs were getting really weak and I was having trouble transferring between the pedals quickly while driving. I would also get very tired, even at the beginning of the day,” he remembers.

Martin’s GP referred him to Canterbury Hospital for tests where Martin was asked to walk in a straight line. But after being unable to do so, he was referred for an MRI scan and lumbar puncture, which revealed he had primary progressive multiple sclerosis.

“I didn’t know anything about MS. I was horrified to be told I had a potentially disabling condition when, as far as I was concerned, I was OK,” says Martin.

Martin’s neurologist predicted he would be in a wheelchair within a year, and also advised him to get in touch with the DVLA, who took away his HGV licence. “Losing my licence took away my ability to earn a living. I still had a mortgage to pay and I didn’t know how I would support my wife and daughter Sam, who was only nine at the time.”

Despite Martin’s decreasing mobility, he persevered with walking sticks and frame for five years before he started using a wheelchair. “I fought it for a long time. Part of me wouldn’t accept it would actually happen and I struggled to get my head around being in a wheelchair.”

In 2007, Martin began going to Kent Multiple Sclerosis Therapy Centre. “It took a while before I felt ready to go. But from my first visit I felt so welcome and like the staff knew exactly what I was going through, which made me go back. It has changed my life. It’s a truly remarkable place.”

Martin attends the centre three times a week and benefits from the many facilities and treatments on offer, including Hyperbaric Oxygen Therapy, physiotherapy, reflexology and relaxation classes.

“All of those things combined keep me going, but the physiotherapy is probably the most important. As well as helping me to stretch my limbs and stay as mobile as possible, my physiotherapist, Sue, has been a huge support. At first I was frustrated I couldn’t do the things I used to, but she made me see that while it was going to be harder and I had to take things slowly, there was nothing I couldn’t do.”

Martin has learnt several strategies to manage his symptoms, such as developing routines for everyday tasks. He has also managed to stay fit by attending the gym twice a week. “It takes a lot of effort to get anywhere, but it’s worth it. I have a specially adapted car, so I can keep my independence.

“I do worry about the future, particularly about whether I’ll be able to stay independent, but I’ve got too much to be grateful for to be depressed.”

As well as a support network of family and friends, Martin has also made good friends at the centre. “We all learn from each other. Without this place I don’t think I’d have got this far. They’ve given me the confidence to make the most of my life.”

Kent Multiple Sclerosis Therapy Centre raised £4,647 in The Candis Big Give, which will help them to hold an additional 336 physiotherapy sessions, enabling more people to have access to a neurological physiotherapist and be able to maintain their mobility levels longer.