“More lives can be saved”

Andrea Hynes-Whalley, 43 from Fife, reveals why Ovarian Cancer Action’s work is so important for women like her

Waiting for pregnancy test results is a nerve-racking experience for most women, but for Andrea Hynes- Whalley, the wait was particularly tense. Nine months earlier, Andrea had undergone surgery to remove a tumour on her ovary, which left her worried as to whether she’d be able to have children. “We had only been married a year when I discovered
I had ovarian cancer, and from that moment I had one main concern – whether I would ever be a mum.” 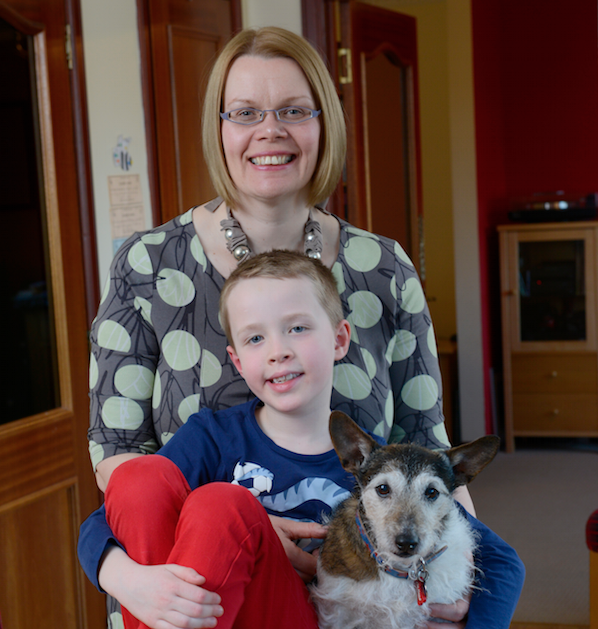 Andrea’s symptoms began in 2006 as a severe rash. But a few weeks later she felt a sharp pain in her groin. “I tried to find where it was coming from and the next thing I knew, I’d collapsed and my husband was phoning for an ambulance to take me to A&E.”

Andrea had an ultrasound to look for a suspected femoral hernia, but the results didn’t reveal anything unusual. “A few days later, I was in my car when I felt a pop in my tummy, like a water balloon bursting. Suddenly, my trousers were covered in blood.”

Andrea’s GP ordered an urgent ultrasound at the hospital. “I went for an external scan, but then they asked if they could do an internal one. I knew they’d found something, but cancer never crossed my mind.”

After her GP delivered the news they had found something serious, she was given a list of surgeons’ names. “I went home in shock,” says Andrea. “But I researched the names on the internet and chose one who offered minimal, non-invasive surgery.”

Following a series of tests by the consultant – which included a CT scan and blood test – Andrea was told that while the cancer had not spread, she did have a tumour that would need to be operated on. He advised a full hysterectomy, which she refused. “I told him he could have a look, but couldn’t do a hysterectomy without my consent. Fortunately, by taking away my right ovary and fallopian tube, he removed the tumour.”

Following the surgery, Andrea’s desire to start a family meant she chose not to have a course of chemotherapy, but to be monitored via blood tests and a monthly scan. And after three months, she was given the go-ahead to try for children.

“I didn’t get pregnant straight away, so I was given a low dose of Clomid, an egg-stimulating drug, for three months,” says Andrea. “I had two unsuccessful cycles, but on the third cycle I did a pregnancy test – and it was positive!”

That was seven years ago and Andrea’s son, Finlay is now a healthy and happy little boy. “He was my miracle baby and is such a lovely boy. He completes our family and we feel so lucky to have him.”

Unfortunately, Andrea was unable to have more children, so last October, she had a hysterectomy to minimise the chances of her cancer returning as the risk increases during menopause.

Andrea is now determined to live life to the full. “The experience has made me want to spend time on the things that are important,” says Andrea. “I was really involved with my career before, but now Finlay is my priority. I just want to be around for him and enjoy every moment spent together.”

Ovarian Cancer Action aims to establish the UK’s first ovarian tumour bank, helping scientists to build an understanding of the disease. “Funding research into ovarian cancer is important, as there isn’t a great understanding of the disease,” says Andrea. “As my tumour was rare, there wasn’t much information, so there was disagreement about what type of tumour it actually was, as well as the best method of treatment. Establishing a tumour bank could help to develop a better understanding of rare forms of ovarian cancer and how to treat them.”

The £6,678 raised by Ovarian Cancer Action in The Candis Big Give will help to establish the UK’s first ovarian tumour bank with a collection of biopsies and blood samples, to understand the disease and improve its management, diagnosis and treatment.