Back to previous page | Home Sparks

“We are so grateful to Sparks”

Monitoring early childhood milestones, such as walking and talking, is natural for any parent. However, for David and Sarah Joyce this was an incredibly anxious time. Their son, Riley, had been born with a high risk of permanent brain injury and disability after suffering oxygen deprivation during delivery.

“We were always looking for signs that Riley was progressing as expected and were nervous he might not meet the expected milestones,” says David. “Every little bit of progress he made was a miracle to us.” 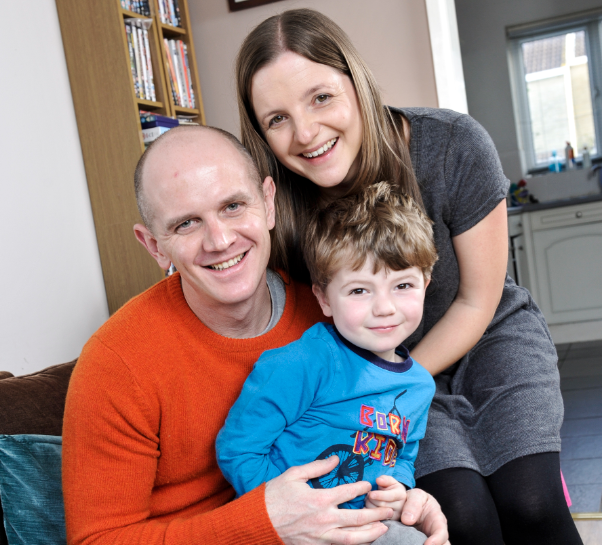 Sarah had experienced a healthy pregnancy and the early stages of labour were normal, so it was a shock when they were told Riley’s heart had stopped during delivery and he had stopped breathing. Sarah was rushed for an emergency Caesarean, then Riley was passed over to the hospital’s resuscitation team.

“The team instantly set to work trying to revive him while Sarah and I waited in a room nearby. After about ten minutes we were told they had managed to find a pulse. However, as he had been starved of oxygen during delivery, we were warned of risks of brain injury and cerebral palsy.”

Riley was transferred to St Michael’s Hospital in Bristol to be treated by a specialist team. “I was able to go with Riley, but Sarah was recovering from the operation and had to stay behind in Bath. It was very difficult to be split up during such a traumatic time.”

On arrival at the hospital, David met with Consultant Neonatologist and Professor of Neonatal Neuroscience Marianne Thoresen, who informed him about a new combined cooling and xenon gas treatment developed from research funded by the children’s medical research charity Sparks.

“They explained the treatment could help prevent brain damage and disability and asked would we be willing for Riley to be the first baby in the world to be given the treatment,” says David. “Although they were very positive about the treatment, it was a really difficult decision to make and we only had a few hours to decide. We saw it as an opportunity to help our little boy.”

Riley underwent 72 hours of cooling and received xenon gas over three hours, which is believed to increase brain protection. “We were really scared but also hopeful at the amazing turn of events that meant Riley could receive the groundbreaking treatment he needed,” says David.

“Afterwards, we were told he had responded well, but would have to wait to know how effective it had been. After three days, it was just lovely to finally hold Riley and start building a relationship with him. We were even pleased to have a screaming baby as he hadn’t been able to make any noise!”

Riley was in hospital for two weeks in total then had regular appointments with Professor Thoresen and a physiotherapist over the next two years. “They checked how he was progressing and were really happy,” remembers David. “He never crawled, which had us a bit concerned, but at 13 months he got up and walked, and then he was away!”

Riley is now a happy, healthy four-year-old, thanks to the pioneering treatment. “He started school last September and is doing really well, with lots of friends,” says David. “He loves going out on his scooter, playing with his little sister and is also a fast little runner.

“Seeing how well he is doing makes us realise how important those first few hours were. Without Sparks, Riley could be severely disabled and we would all have a completely different life in front of us.”

Sparks raised £276,836 in The Candis Big Give, which will go into The Sparks Innovation Fund to help fund new research into children’s health. By funding important pilot studies and research, it aims to prevent unnecessary deaths and improve children’s quality of life.