Back to previous page | Home In the dog house

In the dog house 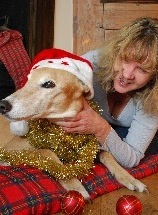 A survey by the Callcredit Information Group reveals that twice as many women as men are worried about overspending at Christmas. I’m determined not to become one of them but it’s an uphill struggle. I’ve got most of the presents now, but it just seems as if every day hundreds of pounds are just walking out of my bank account. Even Doughnut is becoming high maintenance – I can usually rely on him to be happy with a giant ham bone and an extra sausage or six – but not this year. He needed another trip to the dentist… greyhounds’ teeth are notoriously bad and a check-up revealed that yep, looked like he needed another scale and polish and a possible extraction. And unlike the kids who only need a word of reassurance from our lovely dentist and a sticker as a reward, Doughnut has to have a full anaesthetic to get his teeth cleaned. And I need one to read the bill.

But all went well – he only had one tooth out and I got a phone call about five to say he had his Hollywood smile back and was ready to come home. In between me arriving at the vet’s and me collecting him he had a painkilling injection that literally knocked him off his feet. As he tried to scamper towards me his legs buckled under him. The vet and nurses were amazing – they turned up with a doggy stretcher and checked him over and pronounced him too woozy to go home.

I returned in the morning to collect him and he bounded into a cab like a starlet let out of the Priory for Christmas and he is now back to his bouncy self, but all he’s getting for Christmas now is his remaining two front teeth.

Meanwhile I’m on the home straight present wise, though I’ve had to rebuy all the cyclamens I bought last week for the kids’ teachers – they looked so good I couldn’t resist them and I planted them in our own window-boxes!… It’s known as Breaking into the Quality Street Syndrome and happens every time I try to get ahead. So off I trotted to Sainsbury’s in search of similar bargains and fell in love with some wrapped up in red ribbon and sackcloth – but at £8 each I decided I could do better myself, so opted for the plain ones at half the price.

Kirstie eat your heart out – I’m off to the haberdasher’s but not before I’ve been to the school Nativity.