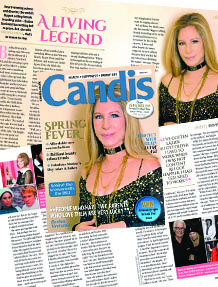 Living legend Barbra Streisand is the biggest-selling female recording artist in the world, an Oscar-winning actress and a Golden Globe-winning director, but here are a few facts that you may not know about the star…

– When she duetted with Neil Diamond on You Don’t Bring Me Flowers, it wasn’t the first time they had sang together – they both sang in the same school choir at New York’s Erasmus High School.

– Barbra was in at the same acting school as Dustin Hoffman when she was 16. She said, “I used to babysit to get free acting lessons, and he was the janitor.”

– One of her first jobs was as a switchboard operator.

– With blockbuster Yentl, Barbra became the first woman since the silent movie era to direct, produce, write and star in a feature film.

– Barbra is proud she has stayed true to herself, saying, “I arrived in Hollywood without having my nose fixed, my teeth capped, or my name changed. That is very gratifying to me.”

– Both of Barbra’s husbands, Elliott Gould and James Brolin, starred in the film Capricorn One.

– Barbra is one of the few people who are an EGOT – the stars who have one at least one of the four major entertainment awards, Emmy, Grammy, Oscar and Tony.

– She was considered for the role of Sandy in the film Grease.

– Barbra isn’t always convinced of her looks but has said, “Now when I look at Funny Girl, I think I was gorgeous. I was too beautiful to play Fanny Brice.”

– She knows she has a powerful voice and has said, “When I sing, people shut up.”