Back to previous page | Home Brad and Angelina 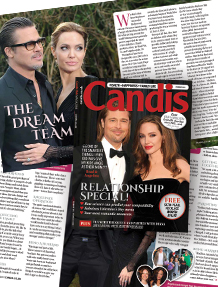 Newlywed A-listers Brad and Angelina are a real golden couple with their mega careers and a huge happy family of six adopted and biological children. Here are a few facts you may not know about them…

– Angelina has a tattoo on her left forearm of the Tennesse Williams quote, ‘A prayer for the wild at heart, kept in cages’.

– She says one of her favourite TV shows is King of the Hill, but also enjoys the Game Show Network and Animal Planet.

– Angelina used to own several pet reptiles, including two snakes! So she had no problem shooting the snake scene in Alexander in 2004.

– She has said, “Therapy? I don’t need that. The roles I choose are my therapy.”

– At school, Brad’s nickname was ‘The Pitt-bull’.

– His first job was dancing in a chicken suit to draw customers to a restaurant on Sunset Boulevard.

– Brad tore his Achilles tendon during the production of Troy in 2004, in which he plays, ironically, Achilles.

– Brad has said, “Fame makes you feel permanently like a girl walking past construction workers.”

– Joker Brad appeared on the very last episode of Jackass, when the crew ‘kidnapped’ him.