Top actor Paul Bettany is back soon in Avengers: Age of Ultron and is married to fellow star Jennifer Connelly. Here are some facts you may not know about the celebrity… 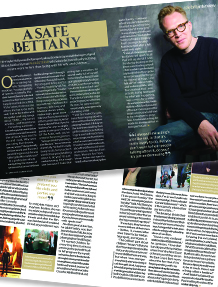 – Paul plays guitar and used to be a busker on Westminster Bridge.

– He developed laryngitis after filming A Knight’s Tale because of all the yelling he had to do as Geoffrey Chaucer.

– Paul suffered another acting injury in The Da Vinci Code. He had to wear a wig in the film as, when they bleached his hair for his role, it burned bleeding holes in his head.

– He decided he wanted to be an actor at 19, and his heroes are Humphrey Bogart, Al Pacino, Robert De Niro and Peter O’Toole.

– He acted for a year with the Royal Shakespeare Company.

– Paul says he loves Westerns, “They are really classical. Their structure is like a Roman tragedy.”

– He ends up naked in a lot of his work and says, “There is a certain grace and kudos that come with taking your clothes off on the first day; a respect that is given by the rest of the cast.”

– Paul’s favourite film is Raging Bull. He says, “I defy anybody to point out one thing that’s wrong with it. It’s just perfect.”

– He enjoys being a Brit in America and says, “I love the way British people see themselves. We say, ‘He’s like us… a bit of a loser.’”

– He has also said, “I’m English, so I can’t wear a baseball cap. I’d look like white trash, like I should have a beer and a dog called Skeeter.”