Back to previous page | Home The Sound of Music on stage

Win a family ticket to see The Sound of Music on stage!

One of the greatest musicals of all time returns to the stage in a magnificent new production to enchant and enthral the young and the young at heart. 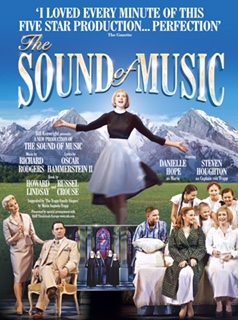 Based on Baroness Maria von Trapp’s 1949 autobiography, this wonderfully lavish new staging of The Sound of Music tells the true story of the world-famous singing family, from their romantic beginnings and search for happiness, to their thrilling escape to freedom as their beloved Austria becomes part of the Third Reich at the start of WWII.

The unforgettable score features some of the most memorable songs ever performed on stage, including ‘Edelweiss’, ‘My Favorite Things’, ‘Do-Re-Mi’, ‘Climb Ev’ry Mountain’, and of course, the title song – ‘The Sound of Music’.

Playing the iconic role of Maria von Trapp is DANIELLE HOPE, who captured the hearts of the country when she won BBC Television’s Over the Rainbow.

This new production of the classic stage musical coincides with the 50th Anniversary of the film version – the best loved and most successful movie musical in history.

The Sound of Music is touring the UK throughout 2015. See www.kenwright.com for more information on tour dates and venues.

We’ve got 2 family tickets up for grabs. Enter now for your chance to win!

Terms and conditions apply. Prize is valid for Monday – Thursday performances at a venue of the winners’ choice, subject to availability. Family ticket is comprised of 4 tickets (minimum 1 adult & 1 child). Prize is as stated and cannot be transferred or exchanged

One Response to The Sound of Music on stage