Broadchurch the game-changing British TV series, had the nation on the edge of its seat and became a genuine television phenomenon, drawing critical acclaim and scores of fans along the way. Now the Dorset-set drama returns with a shocking second outing and comes to DVD and Blu-ray courtesy of RLJ Entertainment’s Acorn label. 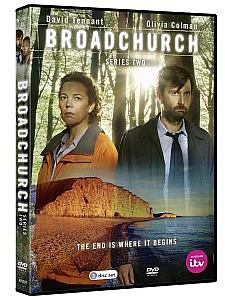 Set against the stunning Dorset coastline, the residents of Broadchurch struggle to come to terms with the after effects of the murder of a young boy and their community torn apart. The devastating turn of events sends shockwaves through the town.

The stellar all-star cast returns with David Tennant as D.I. Alec Hardy and Olivia Colman as Ellie Miller, Matthew Gravelle as her husband Joe, Andrew Buchan and Jodie Whittaker as the bereaved parents of Danny Latimer and Arthur Darvill as the vicar. They are joined by the great acting talents of Charlotte Rampling, Marianne Jean-Baptiste, Eve Myles, James D’Arcy and Meera Syal in the gripping new eight-part Broadchurch Series Two that will be released on DVD and Blu-ray, as well as Broadchurch Series One and Two Box Set released in both formats on 16 March 2015.

We have four copies of this DVD to give away. Enter today for a chance to win…