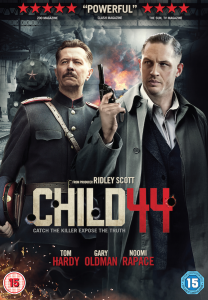 If you like dramatic thrillers then this competition is perfect for you. We’ve teamed up with Entertainment One to give away 10 copies of Child 44 – an action-packed portrayal of murder investigations during the Stalin-era Soviet Union. Produced by Oscar nominated director Sir Ridley Scott, the film features a stellar ensemble cast including Tom Hardy, Gary Oldman and Noomi Rapace.

Based on the best-selling first novel of the ‘Child 44’ trilogy by Tom Rob Smith, the film follows a disgraced member of the military police, Leo Demidov (Hardy), who uncovers evidence of brutal child murders by a serial killer.

Demidov has to work against the all-powerful Soviet government, who deny a murderer could exist in the communist regime’s twisted idea of ‘paradise’, in order to track down the killer before he strikes again.

With a riveting storyline and an outstanding cast, Child 44 is a thrilling, high-stakes action film, providing a terrifying insight into life in the communist Soviet Union.

We have 10 copies to giveaway. Enter now!