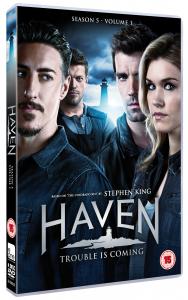 All is not what is seems in Haven, Maine. FBI Agent Audrey Parker (Emily Rose – ER, Graceland), originally came to the small town to solve the mysterious murder of an ex-con, but soon discovered strange supernatural happenings were afoot. Haven Series Five Volume One – the most thrilling series yet – comes to DVD, courtesy of Entertainment One UK on 12 October 2015, following its run on Syfy, and we have four DVDs up for grabs.(RRP: £29.99)

One Response to Haven DVD