Back to previous page | Home Rookie Blue on DVD 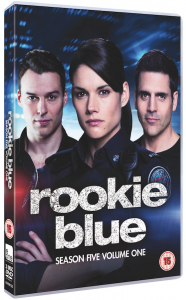 Described as ‘Grey’s Anatomy with guns’, hit Canadian police drama Rookie Blue, is back with Season Five, Volume One, which is out now on DVD courtesy of eOne, and we have 4 copies of the DVD to giveaway.

The series follows the lives of five rookie cops, and Season Five begins with two officers lives hanging in the balance. As the shell-shocked cops struggle to pull the pieces of their lives back together, they can’t help but wonder if things will ever work out the way they’re supposed to.

2 Responses to Rookie Blue on DVD