Back to previous page | Home Win THE FALL on DVD 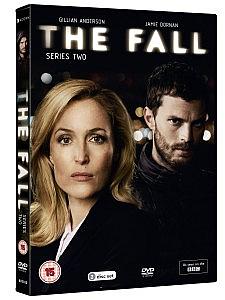 FOLLOWING LAST years hugely successful and gripping thriller The Fall, Hollywood star Gillian Anderson (The X Files) and man of the moment Jamie Dornan (Fifty Shades of Grey) reprised their roles as DSI Stella Gibson and serial killer Paul Spector. The new series has been one of the most talked about series of the year and will be released on DVD and Blu-ray courtesy of RLJ Entertainment’s Acorn Label following its run on BBC Two.

The Fall is a groundbreaking drama that had a nation gripped over five episodes as we followed the lives of two hunters – a serial killer stalking his victims and a high-powered detective superintendent on his trail. The first series was BBC Two’s most watched drama in 2013 attracting more than 4 million viewers. The Fall Series Two comes to both DVD and Blu-ray as two-disc sets and The Fall Complete Series One and Two Box Set will be released exclusively on DVD on 26 December 2014.

The series commences ten days after Paul Spector told DSI Stella Gibson that she would never catch him. As Gibson tries in vain to help Spector’s surviving victim remember the identity of her attacker, Spector is forced to deal with the loose ends that he left behind in Belfast. His return to the city reveals that someone from his past has been helping police with their enquires, forcing Spector to change his plans with terrifying consequences.

The Fall is a complex cat and mouse thriller that will have you hooked from the start as DSI Gibson pits her will against evil psychopath Spector. Can she stop him?

We’ve got 6 copies of Series Two on DVD to giveaway!

4 Responses to Win THE FALL on DVD