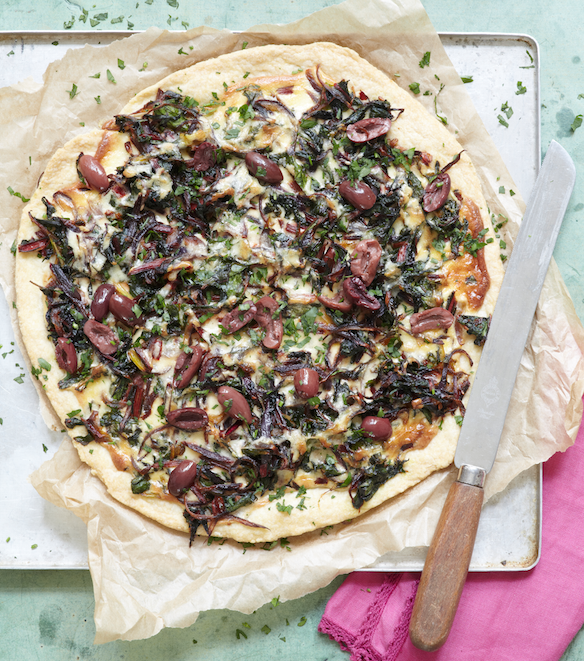 1. Make the pastry ahead of time. Place the flour, sugar and salt in a food processor and blitz to combine. Add the butter pieces and pulse until you have fine breadcrumbs.

2. Tip out into a bowl and bring the pastry together by adding the cold water slowly and mixing with a palette knife until you have a firm dough. Allow to rest in the fridge for at least 20 minutes.

3. Roll out the dough on a floured surface into a rough circle or rectangle. Place on a non-stick baking tray, prick with a fork and bake in a preheated oven (200°C/R 6) for 10-15 minutes or until golden brown.

4. Remove from the oven and set aside, but leave the oven on. Heat the oil in a large pan and cook the sliced onions with the marjoram for approximately 10 minutes until soft but not coloured.

5. While the onions are cooking, prepare the chard by separating the leaves from the stalks. Wash well and chop the stalks thinly. Cook the stalks in a pan of boiling salted water for 3 minutes before tipping in the leaves and leaving to cook for another minute.

6. Drain well and refresh under cold running water. Squeeze out as much water as possible from the chard and chop roughly. Add the garlic to the onions and cook for a further minute before adding the chard.

7. Season well and fold through the onions before spreading the mixture over the pastry base. Then mix together the crème fraîche, Parmesan and egg yolk, season well and drizzle randomly over the chard.

8. Return to the hot oven for about 10-15 minutes until lightly browned. Remove from the oven and sprinkle with the olives and parsley.

The autumn 2015 edition of the Liz Earle Wellbeing magazine is available now from lizearlewellbeing.com. Subscribe to the digital edition for £10 or the printed edition for £19.96 per year for 4 issues, p+p free.