This week, Amanda counts sheep and ogles ostrich feathers in the Borders… 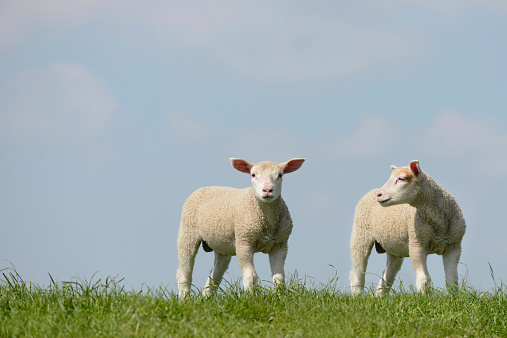 I’m footloose and childfree for a couple of days, so I’m off to visit some friends in Northumberland, reasoning, with only the logic of a Londoner, that I could pop in and see Ella at Uni in Manchester on the way back. Weirdly, not all trains from Newcastle back to London go via Manchester.

I lost my first ticket just before we pulled into Newcastle, but that still left about six more to lose for later.

First stop was a short drive to the lovely town of Hexham where I whiled away the time looking out of the window for new-born lambs. (The Archers should be lining them up in front of the Aga any day now surely.)

As we circled the Waitrose carpark looking for a space, my host, Rhona, explained that it was always busy on a Tuesday because of the Farmers’ Market. I suddenly perked up – all that sheep counting had made me sleepy. “Ooh Let’s go and buy some game pie and artisan cheese,” I said. “It’s bound to be cheaper than London – and better.” Rhona looked at me patiently. “It’s not that kind of farmer’s market,” she said. “It’s a market for farmers – they sell sheep and cows and quad bikes.” “Quad bikes?” “For the sheep,” she explained. “You’d need a quad bike if you had to get from field to field to check on the sheep and take all the food, and hay and a dog,” she said, for all the world as if it were a distinct possibility.

Perversely, she said the farmers prefer to ride tractors in town. I didn’t believe her until we pulled into Corbridge and watched as a farmer straight out of central casting (big muddy wellies, cor-blimey trousers, and flat cap) pulled up in a vintage John Deere outside the Post Office. The only concession he paid to being on the road was the big red L plate stuck on the front. We agreed he must have gone in to renew his provisional licence.

I’ve fallen in love with Corbridge – it’s the sort of place that gives junk shops a good name. Top of the list is Re, the darling of magazine stylists, which combines genuinely wonderful vintage finds with finding brand new versions of things you would only otherwise find mouldering away in sheds, like wooden hearth brushes and ostrich feather dusters. In the olden days those poor birds’ tail feathers would have been peppered with gunpowder, having been shot for our domestic bliss by a Victorian colonel. Now they are raised up the road in Cumbria to the strictest welfare standards.

I settled for a pastry brush for 50p instead. They make their own game pies round here.

Look out for more from Amanda every Friday, and tweet us your views @candismagazine