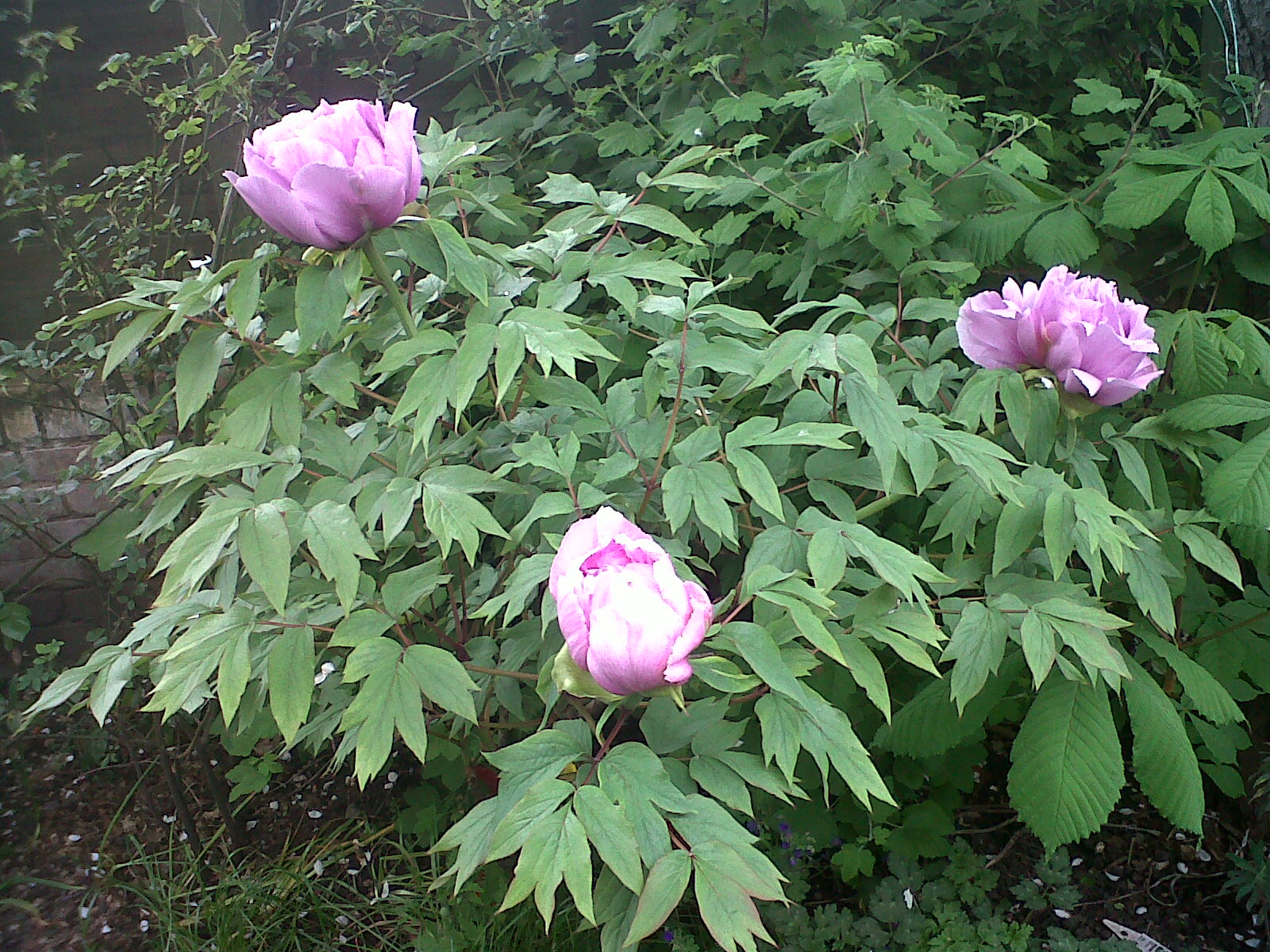 Looks like we’re heading for another rain-splattered weekend. I’m determined not to let the garden go to rack and ruin this year – but the weather has other ideas. I clearly remember reminding myself two weeks ago that it was time I “tackled the lawn” (all ten square feet of it) when Katy began picking the dandelions and blowing them as if they had already turned into dandelion clocks. Yesterday she was out there again, between showers, blowing the now fully-formed dandelion clocks to the four winds. So we can look forward to another bumper crop in a couple of weeks….

When life serves you dandelions, make a fancy salad, I thought, as I peered through the rain-spattered window at the soggy remains of what was to have been the first non-tumble-dried laundry load of the year.

But it’s not all doom and gloom – I was cheered up by the fabulous sight of the peony that has been beavering away quietly in the corner minding its own business for weeks. With little or no help from me it has produced three flowers – a record. The previous two years it produced none at all, and the year before that its solitary bloom was cut off in its prime by a flying football. (Not that I bear grudges. Now get back to your computer game Jack, that’s quite enough healthy activity for you.)

But I’m not the only one who’s celebrating a long awaited rare bloom this week. The biggest flower in the world, the Titan Arum at the Eden Project in Cornwall has just burst into flower for the first time in seven years, creating its characteristic stink of which has variously been described as rotting meat and an incontinent cat. It’s the sort of event that attracts its own fan club, with keen Titan Arum spotters tuning in to the Eden Project’s webcam throughout the day then beetling up the M25 to catch it before its flowers fade after 48 hours. See it for yourself.

The Eden Project is always worth a trip, you don’t have to wait seven years to have your socks blown off by its magnificent plants – just pop into its Rainforest Biome if you don’t believe me. But if it’s rich pickings and questionable taste you’re after, head to Chelsea in London. No. I’m not talking about bumping into the devilishly rakish Spencer Matthews from Channel 4’s Made in Chelsea. I’m talking about the Royal Hospital, Chelsea where the 100th Chelsea Flower Show has lifted its ban on garden gnomes for the first time in 100 years. Ta dah! And it’s all in a very good cause. The RHS will be auctioning a selection of celebrity gnomes to raise money to fund 15 horticultural apprenticeships and create an RHS Learning Centre in Essex. Elton John has already finished his – and very handsome he looks too. Find out more by visiting the RHS Chelsea Centenary Appeal website.

And if you can’t make it to the show in person next week (Monday May 21-25) you can still take an active part by touring all the gardens online then voting for your favourite. Now that, with the rain hammering down outside while the grass grows as high as Doughnut’s eye, is the kind of armchair gardening I shall be looking forward to this weekend.