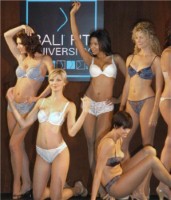 There are clearly two schools of thought when it comes to underwear.

The first is to see under garments as purely functional items to protect one's modesty and to provide support. The second is to see underwear as you might any other piece of clothing – as a fashion accessory and something to splash out on.

Perhaps quite obviously, Victoria's Secret takes the latter view, although the lingerie company seems to have taken the proverbial biscuit with its latest creation, the £1.6 million Floral Fantasy Bra.

Replete with 5,200 gems and 20-carat diamond centrepiece, this is certainly not something you'd wear to the gym or at any other time frankly. Especially as it costs the same as a country mansion to buy one.

However, Brazilian 'Angel' Alessandra Ambrosio is insistent that the ostentatious creation is both dazzling and supportive.

'It's built on the Very Sexy Push Up Bra, that gives you beautiful cleavage, so it's comfortable," she explained.

Victoria's Secret apparently isn't the only firm that sees underwear as a luxury and not just a necessity. Rob Kardashian, one of Kim's lesser-known siblings, is reportedly preparing to launch his own sock range.

Having seen some pictures on Twitter, it's certainly a bold collection to say the least – featuring more colours than a packet of Skittles. I'm certainly not sure about the camouflage designs, although some of the geometric patterns are quite striking.

Rob's 100 per cent Egyptian cotton garments will retail for almost £20 a pair, which, if you're partner is anything like mine, is far too much to spend on socks.

He doesn't seem to have a single pair that isn't full of holes; so it would simply be a terrible waste for all that lovely Egyptian cotton to be torn to shreds at the hands, I mean feet, of my husband.

Plus, he always gets given a set by one of his adoring relatives at Christmas, so he only has to wait a couple of months before he gets to stock up.

What’s the most expensive item of underwear you’ve ever bought?

Posted by Many Jones