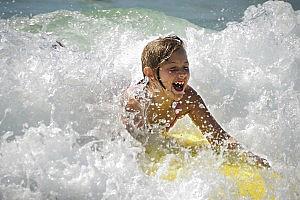 You expect a spot of road rage during a prolonged heatwave, and who can survive a holiday abroad without at least one horrific family row, but a punch up at Legoland?  Never have I been so relieved to be thousands of miles away from a queue of hot fractious toddlers and their even hotter and more fractious parents than when I read about the flying fists at Legoland that only ended when police were called and full-grown adults sent home to cool off and think hard about what they’d done.

And why Legoland? As theme parks go it’s one of the gentlest and most laid-back with none of the frantic manic competitive jostling of some of the more macho parks. Like Whipsnade or Chessington, Legoland has always left me with a warm glow of a successful day out, and my memories of it are of days spent taking photos of kids splashing through water rides or swinging on that blameless pirate ship where fists apparently flew, and of driving home laden with plastic swords, giant plastic cups, sun-kissed shoulders and a pile of happy children asleep in the back.

According to a survey by Allianz Insurance, these summer drives are family memory makers and a chance for families to talk and bond, but it’s one thing I’ve missed out on this year. I’m still wary of driving on the wrong side of the road, or as a tactful Canadian friend put it “the other side of the road,” so this year I’ve yet to take the wheel. In a country where not only do many families appear to have his and her cars but also summer and winter cars (open-sided jeeps for summer, massive wheeled trucks in winter), “taking the bus” is not a natural or normal phenomenon. Where we are the buses come roughly twice an hour and the bus stop is a good ten-minute walk away. Not much cop for getting to work on time but fine for transporting five kids and me into town and back. Ironically, our first excursion was to the indoor swimming pool after we’d spent a tad too much time in the sun the day before. Canadian bus drivers – like all Canadians I’ve come across this summer so far – are unfailingly kind and unflappable. Unused to both the money and the cost of tickets it took me an age to assemble the correct coins. Just like in the UK, bus drivers don’t seem able to give change, but instead of getting impatient the driver just looked at me, looked at the kids, did a rough head count and rounded the fair down to $12 – just over a quid each and coincidentally exactly what I had in my hand.

As local swimming pools go, the local H2O centre beat our council baths hands down – not only did it have two or three “water park” style activity pools with a river run, three giant slides and a place to fire water pistols, it also had a deserted lane pool for adults, a steam room and two jacuzzis – one for grown-ups and one for kids. While I trundled up and down the pool notching up laps the kids were practising their diving and turning somersaults and generally splashing around. It wasn’t Legoland, but for $25 for five of us it was a deal – especially when we discovered the indoor flowrider surf machine. It was a cross between a helter skelter and a swimming pool that created artificial waves and enabled beginners to learn to surf. As spectator sports go it was hard to beat, though my heart did skip a beat when a tiny girl, no more than two, tumbled into the pool only to be picked up by the wave and whisked to the top of the slope like a 2p piece in the penny arcades only to emerge drenched but giggling at the pool at the top. I think her mum aged ten years in the three seconds it took her to re-emerge at the top.

The flowrider was as popular with grown-ups as it was with kids and there was no shortage of slim-hipped crunchy-haired surf dudes showing off their Hawaii 5-0 moves. But I watched with growing misgivings as a large chap with tattoos queued for his turn. Unlike his more confident mates he asked the lifeguard’s help and clung to the rope she handed him for support for dear life as he gingerly stepped on to his board. Seconds later he was upright and practically hoola dancing on his board, swaying rhythmically from side to side with all the laid-back grace of a samba dancer. As he finally glided to a halt we all burst into spontaneous applause – we may be thousands of miles away from Britain’s Got Talent, but we all recognised a Susan Boyle moment when we saw it. Who needs a theme park when you’ve got free entertainment on tap.