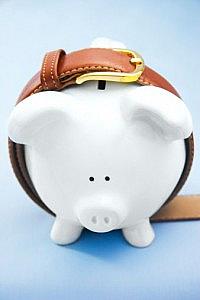 Listening to the radio the other morning the presenters were discussing how all those slightly theoretical and intangible barometers of economic health could be translated into something that actually meant something to the likes of ordinary people like you and me. To kick things off they suggested asking people to identify changes that indicated to them that things were on the up, like the arrival of Waitrose or an upmarket Italian coffee shop in the high street. Signs that the economy might be going in the wrong direction might be a noticeable number of potholes or a sudden rash of pound shops.

I tried to test this theory out this afternoon during a mad dash round the shops, but found myself more confused than ever. On the plus side we’ve got a couple of swanky new coffee shops, a Pret-a-Manger and two thriving organic food shops – you know the kind of place that thinks storing spuds in an open-necked sack on the floor means you can charge an extra 50p a kilo…

On the downside, one of the smarter hairdressers has been “closed for refurbishment” for a little longer than is strictly credible, ditto the unnecessarily expensive beauticians where everything seemed to involve lots of elaborate equipment. Worst of all our lovely family-run jewellers – where you could never fail to get a last-minute birthday or Christmas present that really looked the business for about £10 – has been taken over by a chain of pawnshops. So instead of a window full of lovely antique silver charms and earrings, it’s full of garish “cheques cashed now” and “cash for gold” posters.

Now that I’m back home, watching an exhausted Doughnut chasing rabbits in dreamland while the kids pretend to do their homework, I wondered what my family equivalent of a posh new coffee shop or a boarded up restaurant was.

Here are my top three “money is tight” indicators:

And signs of green shoots?

Let me know what “belt-tightening” means to you and we’ll tweet them later.