Back to previous page | Home Is sleeping alone the way forward?

Is sleeping alone the way forward? 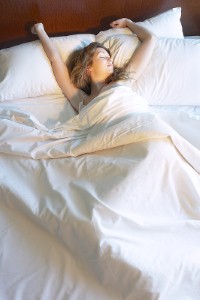 I’m rather surprised by this Premier Inn poll, but as someone who’s been married for almost three decades, there are certainly times when I resent sharing a bed.

The average Brit endures 12,584 sleepless nights over the course of their lifetime, and a lot of these could be avoided by not having someone else in the bed I guess.

My husband can be a bit of a snorer at times, especially when he’s ill or had a couple of drinks, so I do find myself going to sleep in the spare room in the early hours of the morning if it all gets too much.

Almost a quarter of respondents said that their partner’s snoring was ruining their sleep, with six per cent even being woken up by their partner mumbling in the night.

The average person aims for seven hours of sleep each night, but this can certainly be difficult if you and your partner have different sleeping styles and routines.

For instance, I have to be up a lot earlier than my husband, meaning I go to bed before him and get up ahead of him too. As a result, he often wakes me up in the night and I end up disturbing him in the morning.

This isn’t a problem on the weekend, when we can enjoy a deep slumber, but it could be a reason why many couples with separate routines prefer to sleep in separate beds.

For me, sharing a bed is part of a healthy and loving relationship, allowing you to feel safe and secure, and giving you as a couple time for affection and intimacy.

My mother in law recently told me that she was considering getting twin beds for her and her husband, as she found it extremely difficult to sleep next to him.

While her reasons were understandable (what man needs to take four hot water bottles to bed?), I still found it sad that they were prepared to sacrifice some of their closeness.

What do you think about sleeping in separate beds?

When it comes to good food, the kind that brings back memories, the fantastic roast dinner comes up trumps, according to new research that is.I have to agree with the findings from Cathedral City, which commissioned the study, because it reminds me of some of what life used to be…

It’s finally official, going for walks in the countryside is Britain’s best-loved pastime.My husband and I have always been keen hikers, regularly visiting the Dales, Pennines and Lake District to take in the spectacular scenery.I can honestly say that standing on top of a mountain or simply enjoying the British…

How can you encourage kids to walk to school?

Ask most adults and they can reel off the benefits of regular exercise in next to no time. Offer the same question to a child and the answers might not be as obvious.With such a successful summer for British sportspeople up and down the country are trying to work out…