Back to previous page | Home Nativity 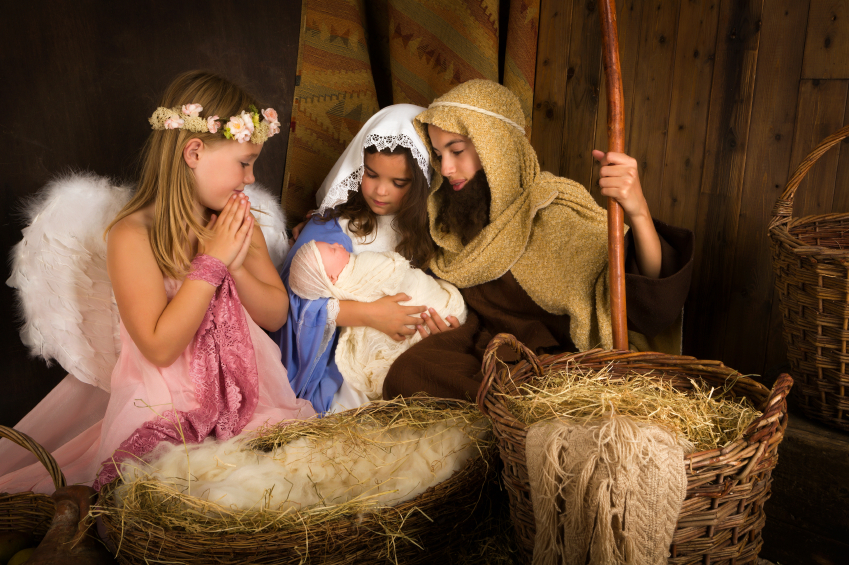 I worked out yesterday afternoon, as I filed out of the school hall glowing like a satsuma and trying not to blub, that this has been my 18th school nativity, not counting my own or my sister’s, of which I can remember nothing except a scratchy tinsel crown and my sister dropping the triangle at a crucial moment.
They mostly merge into one snuffly blur of shepherds in checked tea towels, angels in tinsel halos and scene-stealing inn keepers, but a couple stand out. One was Cleo’s debut as a two-year-old turkey in a paper hat and a grin you could see from Bethlehem – disguising the fact that she was secretly mortified not to be a Christmas pudding. Four years later I had to wrestle her to the ground to get into her angel costume in Year 2. A couple of years after that and Jack, then six or seven, practically staggered off the stage a couple of years later when what we had all taken to be a glow of pride at his starring role as Joseph turned out to be a temperature of 102.
Two of our angels have almost flown the coop and even Jack, at 13, has hung up his trombone, so it was up to Katy to fly the nativity flag solo this year, playing the automated voice of the Holiday Inn as Joseph desperately rings round for accommodation. “At the tone please leave the name of your destination, press star to hear these options again.” You get the idea.
It was a magical all-singing, all-dancing production, with live music, pre-filmed action shots (the three kings driving across the desert in a jeep, Mary googling baby names, and L-plated angels flying in formation across a blue screen) and the school brass band belting out Silent Night as an encore. It was as international and interfaith an affair as you could imagine, the jeep-driving wise man, Melchior was from Swiss Cottage via Somalia, the shepherds from Albania, the trombone section alone came from Finland, Bangladesh and Gujarat and the youngest angel sported a hijab beneath her tinsel crown.
It was forty minutes of blissful innocence and peace, mums, dads, grannies, grandpas and friends sitting together, their phones on silent with nothing to worry about except whether the new-born baby in the audience would out-cry baby Jesus, or whether they could get from Twelve Lords a-Leaping to A Partridge in a Pear Tree without passing out.
As the head teacher, once he’d recovered from the polish and glitz of the performance, pointed out, seeing all our children from so many different backgrounds working together so beautifully was not only a lesson to the rest of us, but in a week when so many families in Peshawar, Pakistan have had the ones they love so brutally taken from them in almost exactly the same setting, a luxury to cherish.