Back to previous page | Home The final countdown 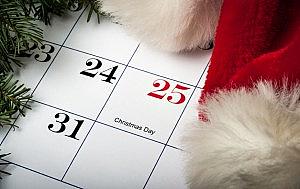 We’re almost there but I’ve still got a to do list that doubles overnight – I feel as if the house has been invaded by rogue shoemaker’s elves who undo all the work I did the day before and leave a new list of chores for me to wake up to in the morning.

Today’s includes making up two beds next door (finding one first of all), collecting glasses from the office, blitzing the kitchen and wrapping all the presents – not forgetting to pick up my sister and her family from the airport.

I can’t wait – but I do wish I could slow time down a bit at this time of year so that I could enjoy it properly. One more free day would give me time to do things properly but without the flap I don’t think I would ever get round to doing anything.

I am getting more laid back about things though – last Christmas I barely involved the children in anything – leaving them watching a virtual Christmas on TV while I flew out on Guerrilla raids to the shops. This year they’ve decorated their rooms, helped with the choosing and the cooking and more crucially come out shopping with me.

Yesterday I had to get one thing from Harrods (get me!) and make a dent in the food shopping before the supermarkets closed at 5. It would have been quicker and calmer to go solo but nothing like as much fun. Katy was a nightmare to drag away from the tree, tangerines and TV but I eventually got her into her coat and shoes and out of the house. It’s the same with all of them and has been since they were tiny babies – it was always a huge battle to get them out of the house but once the door was shut they turned from squalling banshees into reasonable human beings as if by magic. The only time I have regretted taking her out with me is the time I forgot to strap her into her buggy and tipped her out into the road as I got off a bus on Christmas Eve. But that’s another story.

So, ten years on, we tripped down the same road hand in hand and by the time we emerged from the tube station at Knightsbridge Katy had turned into an Edith Nesbit heroine – all she was missing was a fur-trimmed coat or a ball gown cut from a bolt of calico.

Instead of dashing in and out and buying our token Harrods chocolate we spent an hour oohing and ahhing in the designer rooms, drooling over the food and people-watching on the Egyptian escalator (very ahead of the time those ancient Egyptians – who knew there was a hieroglyphic for “no pushchairs”?) We tore ourselves away from the magical windows and lights and headed back to the 21st century by tube.

Then there was a fruitless trip to a computer gaming shop to buy a game that only exists in virtual space (you have to download it apparently). Still it was fun bonding with the parents in the queue – each of whom was clutching a list of impossibly sophisticated games and gadgets all written in a distinctive child’s handwriting) and made it to the supermarket with half an hour to spare. We managed to get almost everything on our list (written by Ella on Christmassy notepaper, who is now back from university complete with a devotion to cleaning wipes and ziplock bags) apart from anything to do with the Christmas meal itself (no room in the fridge) then we headed to the checkout. I left Katy to unload the trolley of chocolate oranges, real oranges and a gazillion shades of crisps while I went on an essential dash for celery (No glass of celery sticks on the table? That’s it Christmas is ruined!) By the time I came back she and the checkout assistant were firm friends and putting on a distracting double act for the growing queue of people waiting relatively patiently behind her.

We got home to a house full of hungry people all anxious, for once, to help unload the shopping – I wonder why?

Hey ho – it’s true what that wise old Narrator in The Grinch says, “Christmas is in our grasp – just as long as we have hands to clasp”.