Back to previous page | Home Wasters

According to savings and investments firm Standard Life, who’ve just done survey on it, three quarters of us waste, on average, about £52 a week. On top of that we could each reduce our spending by £92 a month without noticing any detrimental effect on our lifestyle. 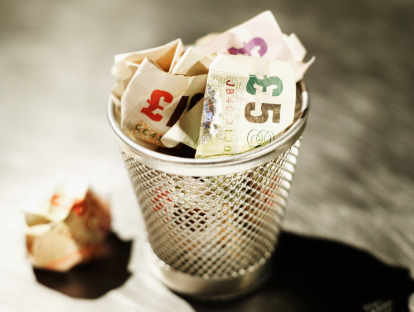 It all sounds horribly plausible, and I’m sure it’s no coincidence that the survey was commissioned to come so close to the April 5 deadline for using up our ISA allowances and Standard Life’s handy offer to set one up by saving £50 a month.

But the scary thing is that it’s in the very nature of wastrels like me to have absolutely no idea how much money I waste every week. You could tell me I’ve wasted £25 on half-finished cups of coffee and cream cheese bagels this week and all I could do is shrug and put my hands up to it.

Now if you want to find out how vital all my credit card purchases were this week, or where all January’s pay packet has gone, you can do it at a touch of a button. It’s all there online in a handy pie chart of my own devising – neatly divided into ‘bills’ ‘food’ ‘kids’ and ‘entertainment’ (not the same thing at all I’m sure you’ll agree). And if I’m too scared to look – tough – it’s texted to my phone every Friday.

But the real wasting goes on unseen, hidden beneath a pile of cash point receipts never to be read, identified, filed or queried. Let me give you an example; yesterday one of my regular classes was cancelled. I had time on my hands and money in my pocket – a very dangerous combination.

I decided to use the time wisely by collecting some parcels on my way to my next class. Of course the route to the parcel depot goes right past the beauty salon – which had just texted me a good deal on mani/pedis. I won’t waste money on that I thought, dutifully, but the old tash could do with a quick waxing… See how my brain works? If I’m spending money on something unglamorous and slightly painful then it’s not technically shopping. In the pie chart in my head it’s in the same section as clearing the shed.

Twenty minutes later, and £20 lighter, I emerged from the salon with a face as smooth, but also as pink, as a baby’s bum. I looked like a toddler after her first bowl of tomato soup. I then decided that if I caught the bus (£1.50), rather than get in my 5,000 steps, I had just enough time to buy an emergency tinted moisturiser from Boots (£12).

Excellent, a grand, totally unnecessary outlay of £33.50. I’ve reached over half my weekly wastrel allowance in one day – and it’s only Monday.