Back to previous page | Home Caught on camera 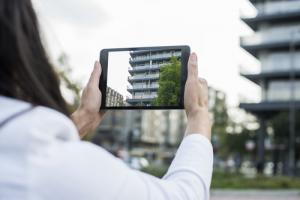 Spring cleaning is a hazardous pastime – not just because of the potential for the sort of paint-related disasters I came so close to last week, but because it’s so easy to be stopped in your tracks by a bout of weepy nostalgia when you uncover a particular photograph or a letter written in a once so familiar and ubiquitous handwriting. I’m sure it’s the trauma of tiptoeing through those emotional minefields that stops me from decluttering, rather than the sheer physical effort involved. After all, I managed to lug three carloads of muck and rubbish off the flat roof in one day and still haven’t scaled the north face of my desk, which is a twentieth of the size.

But sometimes the past sneaks up on you unawares, like the unexpected sound of the late cricket commentator Richie Benaud’s voice on the radio again after he died the other day. His voice was, as Sue Arnold put it so beautifully in The Guardian, a short sharp trip to the green grass of our childhoods. His voice meant summer was finally here because Richie and Dad were together, watching the Test Match in the sitting room with curtains drawn. She was spot on. I can remember those summers vividly. It was the only time the TV was allowed on before 6pm (unless of course it was Wimbledon) and a constant supply of tea was required, switching to a cheeky beer at tea-time if things were looking sticky at the wicket. They were great, fun days, but just because they’ve gone doesn’t mean that we have to be maudlin about what replaced it. The opportunities for fun are greater than ever, as I discovered yesterday when I got roped into helping Katy and her friend research their school’s history. Who’d have thought homework would be fun? Worthwhile? Yes. Rewarding? Possibly, but fun? Yet armed with a list of blue plaque houses, a fully charged tablet and an aerosol can spray-painted gold for a microphone, we hit the streets and spent two happy hours recording our findings in a home-made version of Challenge Anneka crossed with News at Ten. The last time I tackled anything remotely similar was decades ago at journalism college, when four of us were dispatched round Harlow with a video camera and told to come back with something newsworthy. Sadly, technology and nerves defeated us and we spent four Wednesday afternoons scouring the town and came back with some nonsense footage of a graveyard. Katy and Sasha spent two hours filming something vastly more sophisticated and came home to edit it in under an hour and produced something funny, vaguely educational and more importantly, largely squirm-free.

The only trouble is I bet it has me in tears when I stumble on to it in 20 years time….