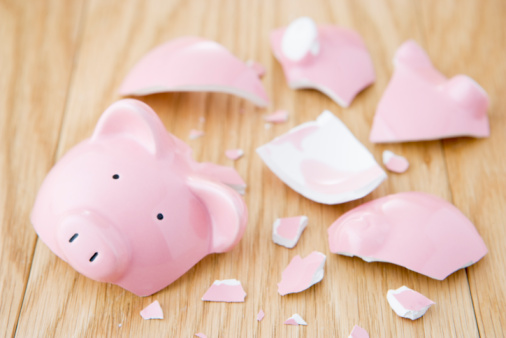 If weekends are bad news for dieters then bank holidays are just as risky for anyone trying to rein in their spending. I can just about stick to a budget when I’m working – at least it takes another nine hours off my available shopping window, but bank holidays are another story. At least in the past most shops had the decency to keep their doors firmly shut on bank holidays – and it was harder to get your hands on the dosh because, er, the banks were closed. Now the sky’s the limit. When I’m at work the maximum I can blow – and that’s if I really concentrate – is about a tenner – a fiver on lunch, a couple of £1 coffees and £3 on the bus. But if I have a free day and a fellow conspirator, then lunch might start with a modest pizza but before you can say “cheeky glass of Prosecco?” I’ll be down £20 before they’ve produced the pudding menu.

Going to work, especially for women who return to the office after a career break, is often hauled out as an expensive business – all that extra spending on travel, clothes and make-up. I always thought that those arguments were as spurious as those made by parents who claimed that they couldn’t afford school uniforms. I’m not a fan of uniforms but with one child at a uniform-wearing secondary school and the other at a non-uniform primary, I know which one costs most to clothe – and it isn’t the one in M&S skinny fit black trousers. It’s the same with work clothes for grown-ups. The last time I looked, it cost me just as much to buy a pair of jeans as it did to buy a dinky little wrap dress from eBay.

That’s mainly because I’ve switched from indestructible 300 denier black Lycra to ten denier nude summer tights, which are about as durable as my one pair a day contact lenses. But I have a plan. I made yet another detour to my friendly neighbourhood beauty salon on Saturday and managed to justify it as an economic drive.

Here’s how I did it. I worked out that I get through at least four new pairs of tights in an average week, which at £3.50 a pair racks up at £14 a week. The cost of a pedicure is £25, which enables my callused old hooves to be seen tights-free in sandals for a month. Monthly expenditure on tights £56, result, as Mr Micawber might have said, misery. Monthly expenditure on pedicure £25? Result, happiness. It’s a no brainer. Before you could say Rimmel London I’d whipped off my tights and had my feet in a mini Jacuzzi picking my way through OPI’s 50 shades of pink.

It all went swimmingly till I scuttled home through a hailstorm, realising I hadn’t factored in how badly Princesses Rule Pink clashes with corned beef coloured knees. Damn the fickle British weather. Fortunately I’ve got a day off on Monday, which gives me time to take up that £20 spray tan offer. Hey ho, in for a penny…